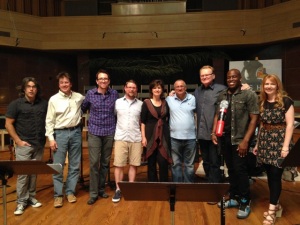 Some of our local worship leaders joined together to be the worship band for an area wide Easter Week worship celebration.

We connect with God and with His people in worship.  These are a few of the practical things I’ve figured out along the way.

Love your people by singing songs in a singable key.  In most cases it will be a little lower than you’re used to, but you’ll have more people engaging if they aren’t pulling a throat muscle trying to sing along.

Enjoy what you’re doing and tell your face.  Open your eyes and smile once in awhile.  Be genuine.  Be yourself.  God loves you and He’s really, really proud of you.

Don’t be afraid of repeating songs.  If a certain song is moving people’s hearts, and you sense the Spirit moving among you, why would you be afraid to sing it a few weeks in a row?  Some songs seem to have a season of anointing or power. Singing heartfelt, familiar songs to Jesus, where they are so familiar people can sing them without looking at the screen; joyful, weeping, kneeling………  Songs like Break Every Chain, Revelation Song and Wonderful make their way into our hearts.  Our kids sing them while they’re outside on the swing set.  Why would we not encourage them by keeping it going?

Dynamics are important.  You need to be aware of what’s going on.  Sometimes, I’ll bring a loud song down to just the people’s voices, with very little instrumentation and repeat a section several times.  It’s a matter of being sensitive to the Holy Spirit and our hearts.  It’s not mystical and mysterious, but it is Spirit led.  I can see faces of people connecting, engaging and embracing worship.  I just see it on their faces and in their actions.  It’s prophetic, but it is learned by observing and listening.  Just about every week, we end up doing a song differently than we did in practice, because there is a nudge from the Spirit and we respond.  It works.

Here’s a tip for leading different groups and multi denominations.  If you’re given 15 minutes for worship songs, ask the Father to lead you through it, and He’ll do it in 14:59.  If you’re given a time parameter, honor it.  If you’re asked to do Shout to the Lord as your closing song, do it.  Giving honor to leaders is so good to do. Laying down your preferences to bless the folks you’ve been asked to lead builds their confidence in you. You’re there to serve.

Never flinch when you make a mistake.  Most people won’t notice if you don’t point it out.  I have a piano player friend who would quietly say “no” every time she hit a wrong note.  She didn’t realize she was doing it, and was grateful when we pointed it out to her.  It’s a good idea to gently, privately, positively point out these kinds of things to team members.  They’ll be grateful and feel loved.

If your denomination and congregation are open to it, invite the people to stand, raise their hands or show some other outward form of connection or surrender in worship. As you lead, you are also teaching by example. Be conscious of your own physicality that speaks and teaches your people as you lead.

Be the one who becomes friends with other worship leaders in your area.  Pull them together.  Do it to bless and encourage each other.  Worship with each other.  The fruit will be amazing!

If you have stories or questions, feel free to comment below.